Input Device for Computer 2 by Abc4you 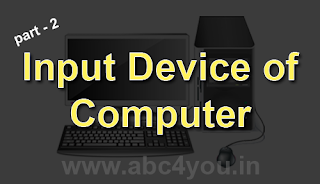 Track Ball:- In computing, a trackball is a pointing input device. It is also a scrolling device it consist of scrolling ball which is operated by finger only to move the pointer across the screen.

Light Pen:- Light pen is a computer input device. This is a pen spear that selects the device to draw the diagram on the screen.

Joystick:- In the computer, a joystick is a cursor control tool used in computer play and assistive technology. It is also a selection tool, which is easily available for playing games on a computer.


Micro Phone:-A Microphone is a device that captures audio by converting sound waves into an electrical signal. It is also input device used to enter songs or voice to the system.in is commonly shape as mic.


MICR:- MICR is an acronym for (Magnetic in character reader/Recognition) It is such type of input device that read the character that are printer with magnetic in manly the currently, station etc.


BCR:- BCR (Bar Code Reader / Recognition) is a familiar. This is an input device, with the help of this tool, the bar code is scanned, which is also known as the POS (point of sale) scanner, it can also print the details of the product.

Input Device for Computer 2 by Abc4you