Input Device for Computer by abc4you 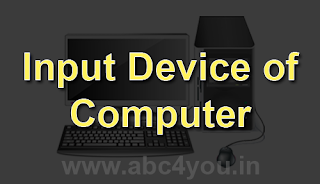 INPUT DEVICE:- The device through which input is given to the system to process are could as input device there are various type of input device to given various data.
Some common of theme are as follow

Keyboard:- Keyboard is the most common input device it is used to given textual data to the system. A typical keyboard contain mainly button on it as these button are simple could as key there are minimum 104 basic embedded on it the key are divided in to many five groups.
They are as follow-

Mouse :- Mouse is the most common selection device used inGUI (Graphical user Interface ) Environment it was developed by Dr. Douglas C. Angarbert in the year 1965. It was wood mouse. He was given its name xy position indicator for all display system later on it was used to be could as bug and low. Due to its shape and size the look of the mouse always green in color normally with the help of mouse we performed the.

A typical mouse consist of two button along with scrolling wheel on its upper surface. The left button is known as primary button where as the right button is could as scrolling button.

Input Device for Computer by abc4you